For Fresh Fiction, I wrote a post about the, um, ambivalence toward bikes shared by me and my heroine, Sarah.

“I need to learn to ride a bike.” Sarah didn’t try to hide her grimace. “By the middle of next week. Even though riding one of those things is basically daring God to smite me.”

That’s the opening of Ready to Fall, my fourth Lovestruck Librarians book. Now, I will freely admit that my heroine, Sarah Mayhew, has a flair for hyperbole. She’s earned her nickname DQ (for Drama Queen) among her friends honestly. But in this instance…well…

I can’t help but agree with her. 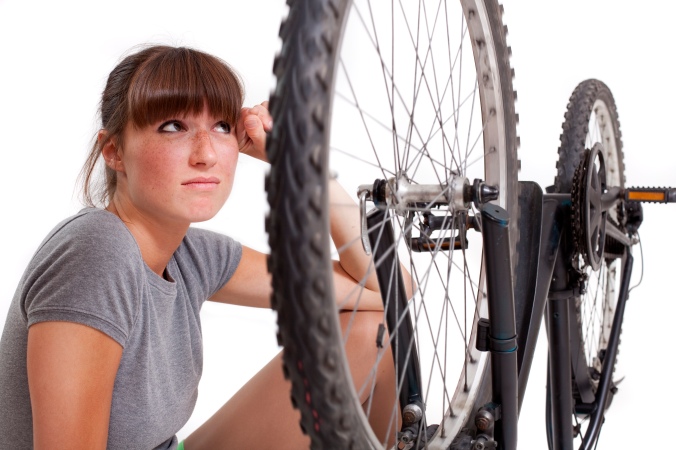 My mother taught elementary school for many years, and—to my dismay—she used to tell her kids three main stories about me. They were cautionary tales, or maybe reassurance that however delayed her students might be in learning certain skills, they certainly couldn’t be as laggardly as her younger daughter. Occasionally, she’ll also tell the same stories to friends, acquaintances, restaurant servers, grocery checkers, random pedestrians, etc.

“Olivia didn’t learn to tie her shoes for years! She claimed the invention of Velcro made shoe-tying skills unnecessary. She made the same argument about digital clocks and her inability to read analog clocks. And you would not believe how old she was before she learned to ride her bike!”

Sometimes, she’ll say I was nine before I learned. Which is a total lie, since I was definitely no older than eight, maybe eight and a half.

Here’s the thing: Bicycles are freaking scary. They’re tall, precariously balanced, prone to picking up an alarming degree of speed on downhill stretches, and basically instruments of death. As a child, I did finally learn to ride mine, but I never really enjoyed it. And as I got older and gained access to a car, I abandoned my ancient two-wheeler without looking back.

Then I met my husband, who competed in long-distance bike races in his native Sweden, as well as an Iron Man Triathlon. When we started dating, I attempted to be a good sport. I bought the cheapest possible bicycle—“I don’t want hand brakes! I want to pedal backward to stop, just like when I was a kid!”—and hit the road with him.

Not literally. But that was more a matter of chance than skill.

My husband, bless his heart, took me out to a winding country lane, surrounded by farmland and silos. The problem: To get to said country lane, we needed to bike a stretch along a very heavily-traveled two-lane highway without a real shoulder. One utilized by eighteen-wheelers.

Long story short: I wobbled, I got (rightfully) reprimanded by the long blast of a truck driver’s horn, and I was terrified.

My now-husband: “Maybe we should have chosen a different road for the beginning.”

But it was too late. I was already scarred for life.

The good news for my husband is that while I no longer want to perch my ample ass atop a tiny triangle of hard plastic and wheel down the road, I do enjoy watching cycling. On my couch, reassuringly close to the ground. So every year, the two of us bond over the Tour de France—the team tactics, the individual heroics, and the beautiful scenery. (Unlike my husband, I also consider the sight of dozens of very fit men in shiny, tight outfits an integral part of that gorgeous view.)

My cycling fears do rear their ugly heads in the mountain stages, however. I can’t watch the riders descend a mountain in the Alps or Pyrenees. Who can blame me? They reach insane speeds, using every inch of the roads as they wrestle their bikes around tight corners with sheer drops one small mistake away. I can’t look. I worry too much, and I have no desire to see anyone hurt or killed.

Yes, I’m a wuss. But we’d already established that, hadn’t we?

So is my heroine Sarah. But in the end, she earns an ample reward for her determination in finally learning how to ride a bike. The expert she finds to teach her, Chris Dean, turns out to be the taciturn man-beast of her dreams. But since I already have my own personal hero at home, I think I can do without polishing my own bike skills for the foreseeable future.

Sorry, nature. I’ll just have to see you on a walk or from a car. Or from behind a window in my air-conditioned house, because really? Bugs and pollen are also overrated. But that’s the subject for another blog post.